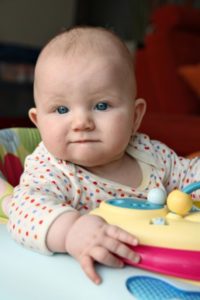 need and might want to consider giving away.  Things they’ve outgrown, like the early ride-on toys, or the baby pushsticks and the baby walker.  I’ve tried to explain that as we get bigger there’s certain toys and even behaviors that we can let go of, so we can make room for new toys and new behaviors that might fit much better where we are at a particular time.   As you can imagine, none of these conversations have gone over very well with either of them.  In fact, neither one is buying it and feel they need keep “everything we have” just for a little while longer.  This conversation did get me reflecting about our own “toys” and behaviors as leaders that may have gotten us to a certain place or position within the organization.  But are they still necessary in our current leadership roles or positions?

I remember what it was like when I was promoted into my first executive role, from regional sales manager to national manager at a Northeast metropolitan newspaper.  The national manager’s role was considered part of the senior leadership team, and I was by far the youngest member of the group.  At 27, I had risen fairly quickly in my career, this new position being the fourth promotion and fourth newspaper since embarking on my newspaper career.  I share all this only to provide some context.   I  had risen to this postion primarily due to my  independence, agressiveness and technical sales and managerial skills — skills I quickly learned were not as valued or useful in my new role.

One of the biggest challenges for me in my new position was that while I knew the expectations for my performance in this executive role were very high, it was difficult to get a handle on what exactly was expected of me.  It seemed I was left to figure that out on my own, and that realization certainly came with a lot of frustration, stumbing blocks and quite frankly, egg on my face more times that I’d like to admit.

Collaborating with my peers, versus acting independently, was a lesson learned.  My technical skills, while still important and valued, quickly took a back seat to new skills I needed to take on, such as becoming more strategically focused, coaching my team,  and learning to communicate more broadly.   I now had to look  at the organization from the outside in, instead of from the inside out.

As Scott Eblin writes in his “must read” book on this subject, The Next Level: What Insiders Know About Executive Success:

“If success at the next level comes down to just one thing, it may be the art of strategic choice.  Making the choice to pick up a new behavior or belief or to let go of one that is no longer serving you requires the capacity to step back and ask yourself, ‘Given what I’m trying to do or accomplish, is this serving me?’  The people who are most successful in dealing with change or navigating the uncharted terrain of the next level are those who choose to step back and get some strategic perspective on what is working and what isn’t.  They then apply that perspective, not just to their career, but to their life as a whole.”

As coaches, we so often talk with our clients about what skills and certain types of behaviors might be missing from their toolkit.  But today I urge you to take a look at what you might stop doing that doesn’t serve you anymore; something that is, in fact, detrimental to your success as a leader in your organization.  What’s working for you and what isn’t.  What early ride-on toys, baby sticks or walkers can you give up?