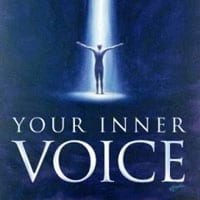 “There is a voice that doesn’t use words. Listen.”

But then they come back a week later, all deflated because their spouse, their mother, father, friend, cousin, et cetera gave them their own opinion and said “it wouldn’t work”, or laughed at the idea, or said something like, “oh, you’re always just chasing the next thing shiny object”.

Or what about the clients that I speak with who tell me they wished they had majored in art versus accounting, or taken a job in the South versus staying in the Northeast, or that they had followed their heart and married their college sweetheart, rather than their spouse. The list goes on and on.

So what’s the common denominator that prevented them from following their heart? They listened to the “noise of other’s opinion’s rather than their own inner voice”.

This week I had the opportunity to reconnect with a young, but VERY successful entrepreneur, Ry Russell. Ry is the Vice President of VR Marketing Consultants in Portland, Maine. This year he has been a part of three different start ups consisting of the Saco Drive In Theater, TxTWave, and VR Marketing. This past summer, Ry and two partners had the opportunity to take over the failing drive-in movie theatre in a small southern Maine town. During his due diligence period, he met with ten well-respected people to get their opinion on whether he should take on this venture. Eight out of the ten told him to “FORGET ABOUT IT!”

Fortunately, Ry listened to his inner voice, made a very detailed business plan, raised the money needed and went for it! And oh, by the way, he increased sales over the previous year by well over 25% and was able to pay back the entirety of their debt three weeks ahead of schedule!

It’s so important to listen to your inner voice. Particularly when you feel CERTAIN that your decision or course of action or choice is absolutely aligned with your purpose. Don’t let others, or logic, talk you out of (or in to) something that doesn’t feel right to you. Trust your instincts. We all have levels of “knowing” that can’t be explained by logic. Don’t ignore that little voice in your head. Develop it by paying attention to it and act accordingly. So what’s the one thing your inner voice has been trying to tell you for some time, that you are now ready to listen to and TAKE ACTION ON???