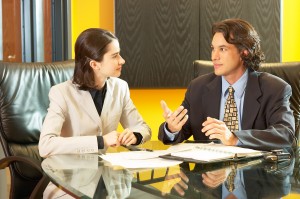 I had the opportunity last week to listen to four very successful women leaders sitting on a panel answer this question:  What is your leadership style?  Their lists were fairly similar:  good listener, collaborative, communicative.  But the one answer I found most satisfying was the leader who said,  “Coaching, I coach constantly, giving feedback at every turn, both positive and constructive”.

And while coaching is more than just giving feedback, providing feedback — both positive and constructive — on a consistent basis is the most one of the most important competencies of an excellent leader.  For managers, it’s an important tool for shaping behaviors and driving better performance; for their direct reports,  its an opportunity for development and career growth.

So why do so many managers have trouble giving feedback?  And why do so many on the receiving end say they don’t get enough feedback they can actually use.  What are the reasons behind this disconnect?  Often times it’s strong emotions on both sides, and a focus on character rather than the behavior. Frequently it’s a lack of clarity around what needs to change and why.   Many of the executives I work with tell me they either do not have the time to give feedback or they do not want to deal with the potential conflict or defensiveness that may arise from the conversation.  But as someone once told me, “withholding feedback is like sending someone out to sea without a compass”.

What can a manager do to improve feedback?

One of the most important responsibilities of your role as a leader — if not THE most important — is developing people. That requires consistent, constructive feedback at every turn, which does take time.  Developing the people in your organization through consistent coaching, training and conversation not only  develops a stronger team, but in the long run also brings more innovation, growth and profit to your company.  Find the time, make the time and give the time.  It is well worth it.

In part II, we’ll take a look at what constructive feedback looks like.  In the meantime, if you would like to learn more about improving your feedback and coaching skills, contact me today for a consultation at 207.653.6977 or e-mail me at mandy@mandyschumaker.com.  I would welcome a conversation with you to see how I can help.